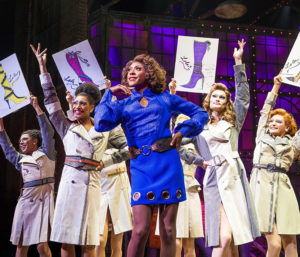 Inspired by true events, KINKY BOOTS tells the story of two people with nothing in common—or so they think.  Charlie (played by Olivier Award nominee Killian Donnelly) is a factory owner struggling to save his family business, and Lola (played by Matt Henry, who won an Oliver Award for the role) is a fabulous entertainer with a wildly exciting idea.  With a little compassion and a lot of understanding, this unlikely pair learn to embrace their differences and create a line of sturdy stilettos unlike any the world has ever seen!

Don’t miss out on this filmed version of the popular stage musical about a shoe factory, a fierce drag queen, and fabulous footwear.